The borough of Stockton-on-Tees lies in the centre of the Tees Valley and shares borders with all four of the other local authorities in the Tees Valley, as well as the counties of Durham and North Yorkshire. It lies entirely within the Natural England National Character Area (NCA) of the Tees Lowlands, a broad low-lying plain of glacial drift and alluvial material, and is crossed by the slow-moving meandering River Tees as it flows towards the Tees Estuary. The River Leven, a major tributary of the River Tees, joins immediately downstream of Yarm, and two large becks (Lustrum Beck and Billingham Beck) drain the open farmland in the west of the borough, joining the River Tees near Portrack Marsh.

The borough comprises open countryside and farmland (mainly arable farming with some pasture and a good network of hedgerows) to the west and south, urban settlement with heavy industry to the east, and a large part of Teesmouth at the estuary, a mosaic of estuarine habitat mostly reclaimed over the last two centuries for industry but still containing large areas of estuary-related habitats such as mud flats, grazing marsh, sand dunes and wetlands along with open mosaic habitat (formerly known as Brownfield sites) on previously industrial land. 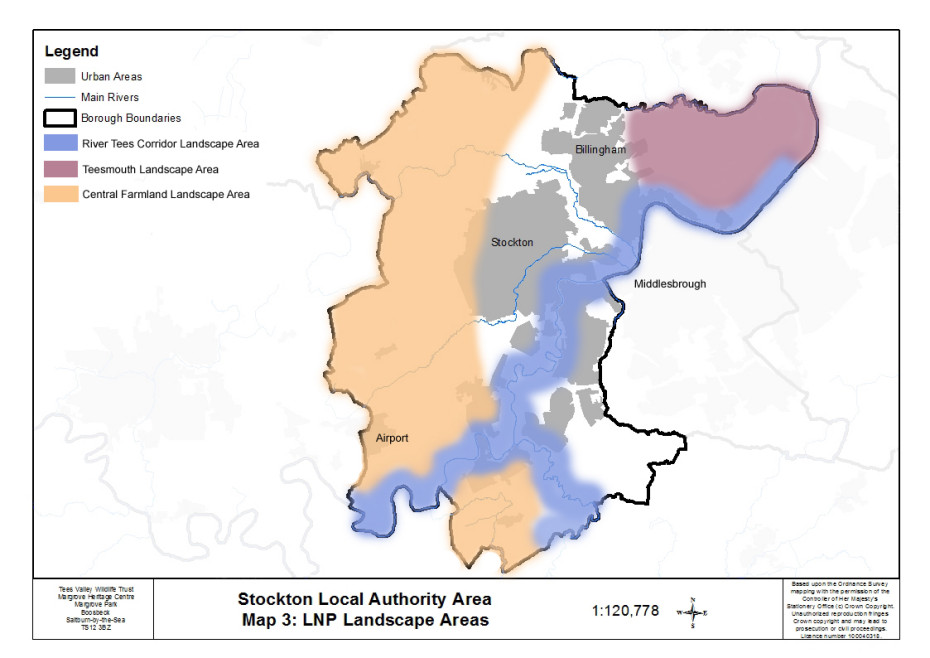 Stockton borough contains a number of priority habitats and species, mostly concentrated within Teesmouth but also along the River Tees corridor and scattered across the open farmland.

There are two saline lagoon sites, one at the point at which Greatham Creek meets Seal Sands, and one within the RSPB Reserve at Saltholme. The aquatic invertebrates occurring in the shallows of these saline lagoons form an important part of the diet of the avocet, and other important water bird species which are associated with this habitat. There are numerous open mosaic habitat sites that are centred upon areas which were formerly subject to land reclamation. The majority of sites consist of open mosaic grassland, often with a small amount of scrub, but also sometimes contain small areas of other specialised habitats, including reedbed and saltmarsh.  Important species found within these sites include grey partridge, skylark, brown hare, purple milk-vetch and a number of nationally notable moth species. There is a cluster of fens within the RSPB Reserve at Saltholme and a further three in other locations, one in the urban fringe and two in the Leven Valley. These latter sites are typically rush-dominated wet flushes on clay hillsides.

Habitats found scattered across the open countryside to the west and south of the urban area include woodland, grassland, ponds, hedgerows and orchards.

Ancient and semi-natural woodland is clustered around the Leven Valley south of Ingleby Barwick, with several linear woodlands occurring along the banks of the River Tees and other water courses across the landscape. The majority of the woodland is found on steeply sloping valley sides. The large area of woodland to the north and west of Wynyard village contains both replanted ancient woodland and broadleaved mixed woodland. There is a cluster of lowland meadow sites in the Leven Valley, a small number scattered around the urban fringe of Stockton, two both designated as Sites of Special Scientific Interest (SSSIs) in the farmland to the west of Stockton, and several around Middleton St George. These meadows are mostly present on steeply-sloping sites and managed as permanent pasture. Other neutral grasslands that are species-rich are found mostly in the open countryside and urban fringe, five of which are road verges and several have associated wet flushes.

There are five clusters of priority ponds, one around Aislaby and Newsham, one around Thorpe Wood Local Nature Reserve (LNR), one associated with the large meanders of the River Tees between Eaglescliffe and Thornaby, one around the RSPB Reserve at Saltholme, and one associated with a stretch of Greatham Creek and Cowpen Bewley Woodland Park. Other priority ponds are scattered across both urban rural areas of the borough. The majority of the ponds meet the priority pond criteria due to the presence of common toad, with others also fulfilling the criteria for great crested newt, whilst many of the ponds within Saltholme meet the criteria for water vole. Remnants of old traditional orchards, associated historically with small commercial enterprises and farms, are scattered across the farmland west of Stockton with a concentration around Yarm and Eaglescliffe. Orchards vary in their size and condition and are now mainly for domestic use. Hedgerows are widespread across the open farmland and there is evidence that hedgerows in some areas may pre-date 1700.

There are four disused quarries with features of geological interest, two at Ingleby Barwick, one at Gravel Hole and one by Stainsby Beck. 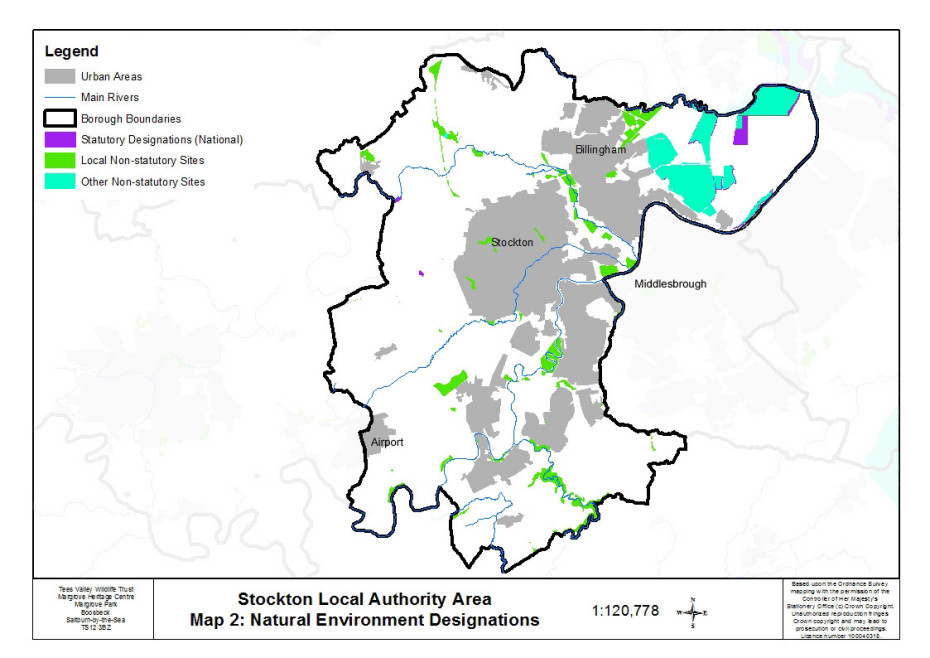 Dense clusters of great crested newt records are found at both Cowpen Bewley Woodland Park and Thorpe Wood LNR.  There is also a high concentration of records in the south around, and to the west of, Eaglescliffe. Water voles are present at the RSPB Reserve at Saltholme and have also been recorded along Lustrum Beck and the old route of the River Tees, and at Greenvale LNR.

Small populations of harvest mouse are found along the A66 corridor between Eaglescliffe and Darlington, and it has also been recorded at Wynyard Woodland Park and Bowesfield Nature Reserve. Otters are well established on the River Leven and along the lower section of the River Tees, and are also regularly recorded around the North Tees Marshes from Saltholme to Greatham Creek. They have been reported in Seaton Channel and at the mouth of the River Tees and are also found on the lower reaches of Billingham Beck and Claxton Beck. Brown hare is found in open areas such as grassland and arable farmland and is widespread where that habitat occurs in the Tees Valley, including the open farmland west of Stockton. It is also found in good numbers around the industrial sites and grazing marsh areas of Teesmouth. There is a breeding population of 70–80 harbour seal in the Tees estuary, which is the largest known population along the coastline from the River Tees north to the River Tweed. The seal population is focused upon Seal Sands but animals also haul out on Greatham Creek at high tide and are seen on the tidal stretches of Billingham Beck and as far up the River Tees as the barrage.

Many areas within the borough of Stockton-on-Tees are of importance for non-breeding/overwintering populations of birds. Teesmouth encompasses the ‘Teesmouth Flats and Marshes’ (a complex of sites listed in ‘A Nature Conservation Review’ edited by D A Ratcliffe (1977)) which are protected through European and International designations because of their importance for non-breeding populations of red knot, common redshank and sandwich tern, and their assemblages of waterfowl of international importance with peak counts in winter. Other important overwintering birds here are mistle thrush and woodcock. Along the River Tees a further two sites are noted for their overwintering bird populations: Bowesfield Nature Reserve and Portrack Marsh.

A number of UKBAP priority fish species are found in the River Tees and its tributaries.

Dingy skipper and grayling butterflies have some of their most significant regional populations on the industrial sites at Teesmouth, and the presence of sizeable populations of these two species on a single site indicates that there are likely to be other important invertebrate communities present. There are a further six sites across the borough that are noted as being important for butterflies. There are also assemblages of nationally notable moth species occurring at the saltmarsh in the Greatham Creek area and in the reedbeds of the North Tees area. A number of these species are also listed as species of conservation priority in the Tees Valley. The forester moth, a day-flying priority species, has its largest UK population at Coatham Wood, Long Newton. This species is associated with common sorrel growing in acid grassland. 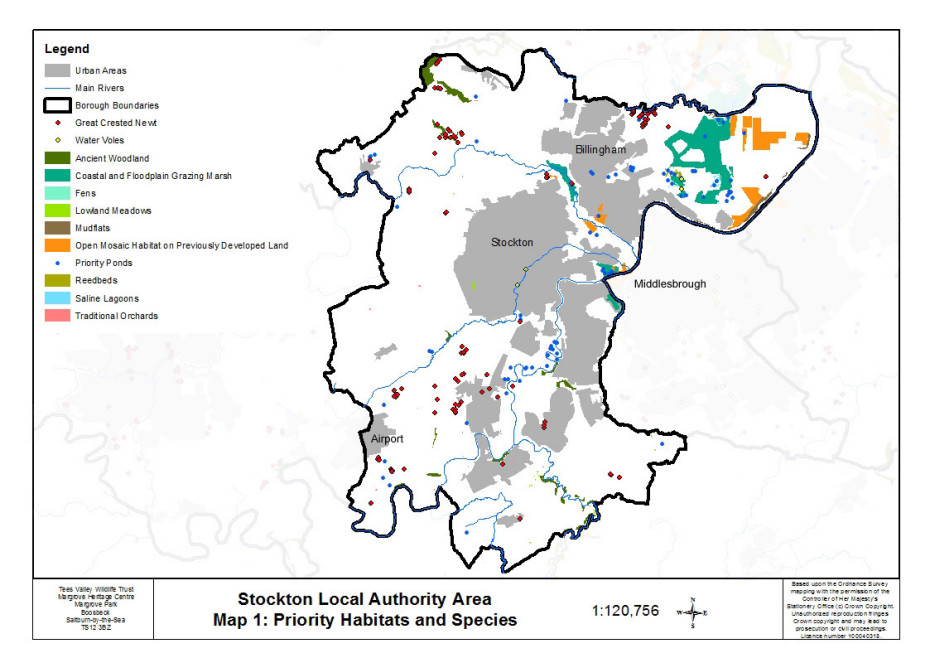