The borough of Redcar and Cleveland has an extensive stretch of coastline with the North Sea as its north-eastern boundary, and borders the county of North Yorkshire to the east and south, the borough of Middlesbrough to the west, and the borough of Stockton-on-Tees to the northwest, across the River Tees. It lies within two of Natural England’s National Character Areas (NCAs), the Tees Lowlands in the north and west and the North York Moors and Cleveland Hills in the east and south. The North York Moors National Park extends into the borough along its eastern and southern boundaries. Urban settlement and heavy industry dominate the north and west of the borough where it borders Middlesbrough and the River Tees, with little natural environment interest except for around the estuary, Teesmouth and the northern stretch of coastline. The larger part of the borough to the east and south is, in contrast, a mixture of open rolling farmland with pasture and arable farming and extensive stretches of open heather moorland with numerous small settlements. This area is characterised by complex beck valley systems (including Skelton Beck, Kilton Beck and Easington Beck) that stretch from the upland moorland to the coast, contain ancient semi-natural woodland associated with other habitats, and are connected through a dense network of hedgerows. 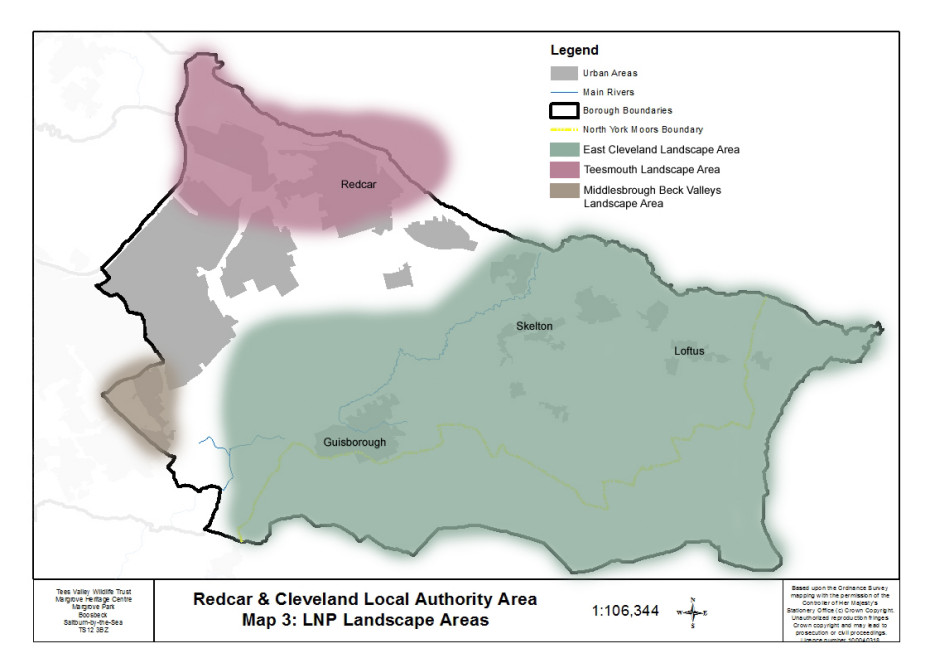 Redcar and Cleveland borough contains a large number of priority habitats and species associated with the complex beck valley systems and the open heather moorland, Teesmouth and the coastline.

Extensive stretches of broadleaved mixed woodland, the majority of which is ancient and semi-natural, are found mostly in the steep-sided beck valleys where they form long stretches of mainly deciduous woodland. Most of these sites have probably had continuous woodland cover since 1600AD. There are also areas of ancient woodland which have been replanted with conifers, many of which retain remnants of associated ancient woodland ground flora and native tree regeneration. There are large tracts of upland heathland along the southern edge of the area, part of the North York Moors National Park, and there is also heathland on Eston Moor.

Large areas of the landscape, particularly around the beck valleys in East Cleveland, are characterised by small field sizes with a dense network of hedgerows that link the other priority habitats. Many of these hedgerows are species-rich and have an associated woodland ground flora, particularly where they are close to the fringes of ancient and semi-natural woodland. It is likely that many hedgerows pre-date 1700.

There are a large number of lowland meadows in the borough of Redcar and Cleveland. They are predominantly managed as permanent pasture rather than hay meadows are found on steeply sloping sites, and are often associated with neighbouring beck valley woodlands. Other neutral grassland sites which are species-rich are found scattered across the open farmland. There is one site each of lowland calcareous grassland (near Skinningrove) and upland calcareous grassland (on Eston Moor), and two sites of lowland dry acid grassland (one within the North York Moors National Park, and one south of Brotton).

Priority ponds are scattered throughout the landscape, with three clusters, one north of Guisborough, one east of Nunthorpe, and one at Coatham. The majority of the ponds meet the priority pond criteria due to the presence of either common toad or great crested newt, with a few fulfilling the criteria for invertebrates, plants or water vole.

A number of old traditional orchards, associated with country estates or farms, are still found scattered across the area. These orchards vary in their size and condition and are now mainly for domestic use. There are three fens within the area, two on Eston Moor and one close to Upleatham (a rush dominated wet flush).

The entire coastline from Marske to the border with North Yorkshire is the priority habitat ‘maritime cliff and slope’, and forms part of the North Yorkshire and Cleveland Heritage Coast. Horizontal ledges on the cliffs support seabird colonies, including kittiwake, fulmar, cormorant and razorbill. The upper cliffs, colonised by scrub, hold dense breeding populations of whitethroat, yellowhammer and linnet. Fragments of maritime grasslands occur along the cliff slopes and tops.

Coastal sand dunes, intertidal mudflats, saltmarsh and areas of reedbed are all found at South Gare/Coatham Sands which is covered by Site of Special Scientific Interest (SSSI), Ramsar and Special Protection Area (SPA) designations. There is also a sand dune system that stretches from Redcar to Marske and small areas of mudflats along the estuary. Coastal and floodplain grazing marsh is found at Coatham Marsh.

Open mosaic habitat on previously developed land (formerly known as Brownfield sites) occurs mainly within industrial areas at Teesmouth and along the estuary. There are three open mosaic habitats in the rural area occurring on post-industrial spoil heaps at Boulby, Liverton Mines and Skinningrove steelworks. These mainly grassland habitats are botanically diverse and support a range of specialised invertebrate species.

There are 23 sites designated for geological interest including exposures of middle Jurassic sandstone formations, mudstone and alum shale formations, Cleveland ironstone exposures, disused mines and quarries. Four are of national importance and designated as SSSI. 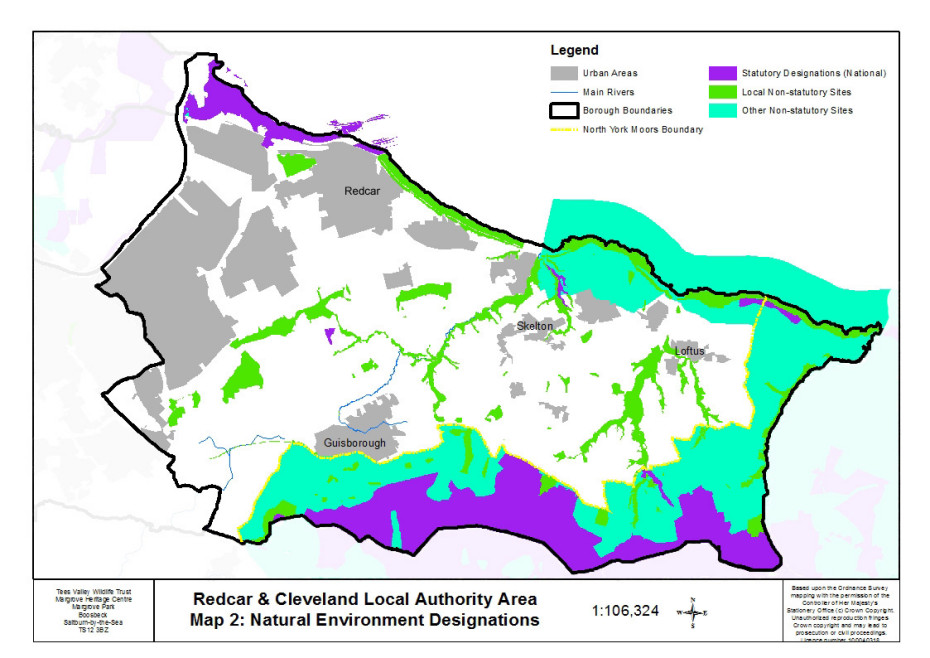 Great crested newts are found across the area with two main clusters, one in the west near Nunthorpe and one north of Guisborough, and smaller clusters scattered across East Cleveland. Small populations of water vole are found in the urban becks of Guisborough. Otters are probably present in all the beck valleys; they are regularly seen at the mouth of Kilton Beck in Skinningrove.

A large percentage of many breeding populations of bird species of key importance in the Tees Valley are present within the borough of Redcar and Cleveland. Nineteen species are listed as of red level of concern in the UK (for example lapwing, grey partridge, willow tit, linnet, and eurasian nightjar) and 22 species listed as of amber concern in the UK (for example curlew, bullfinch, redstart, and fulmar). Twenty one out of this total of 41 species are also UK Biodiversity Action Plan (UKBAP) priority species.

The long stretch of coastline and foreshore from South Gare to Saltburn is important for populations of non-breeding/overwintering birds. South Gare and Coatham Sands form a part of the ‘Teesmouth Flats and Marshes’ (a complex of sites listed in ‘A Nature Conservation Review’ edited by D A Ratcliffe 1977) which are protected through European and International designations because of their importance for non-breeding populations of red knot, common redshank and sandwich tern, and their assemblages of waterfowl of international importance with peak counts in winter.

There is an important assemblage of dragonflies and damselflies at Lovell Hill Pools north of Guisborough. The East Cleveland woodlands are home to white-letter hairstreak butterfly, a priority species which uses elms as its larval food plant; established populations are at Kilton Woods, Tockett’s Mill and Upleatham. The dingy skipper and grayling butterflies occur in the species-rich grasslands associated with open mosaic habitat sites in the area.  Significant populations of dingy skipper occur at Boulby and Liverton Mines, while grayling occurs at Boulby and Skinningrove.

An extensive population of purple milk-vetch occurs on the sand dunes of South Gare with smaller populations and scattered plants at Coatham and along the Stray at Redcar. 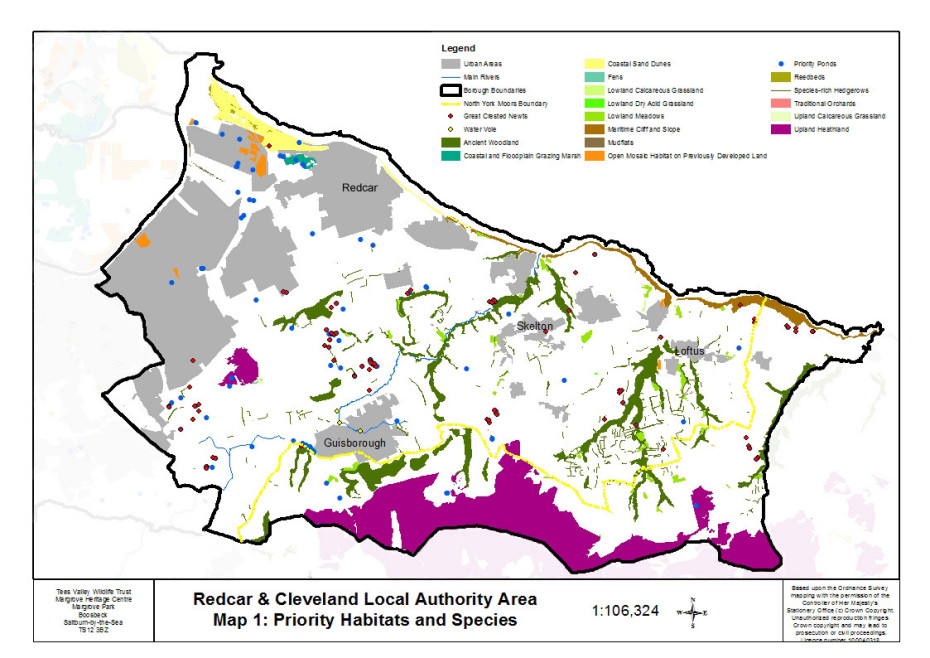